Transparency is central to a just food system. When corporations raise our food in a way that abuses workers, communities, and our environment – and when our government funds that abuse – we need to know about it in order to demand change.

However, the agriculture industry intentionally deceives consumers. Big Ag paints a false picture about how our food is grown and processed – and prevents whistleblowers from exposing the truth. Meanwhile, the government obscures the extent to which they prop up the industry.

Through our litigation, we protect consumers’ right to know the truth behind their food and hold the government and corporations accountable.

Consumers deserve to know the truth behind how their food was produced. Increasingly, consumers want to purchase safe and ethical goods. For example, since COVID-19 spread so rampantly among food chain workers, consumers have become increasingly concerned with the safety of workers who grow, process, and deliver their food. While the ‘vote with your dollar’ paradigm is not the only solution to a food system that needs fundamental system change, it is an important piece of the puzzle. When consumers buy meat that was regeneratively raised, they support the farmers and meatpackers who are paving the way towards a just and ecologically sustainable food system.

However, the meat industry exploits consumers’ desires to purchase ethically. Companies like Hormel and Smithfield portray an image of animals raised humanely, processed by workers treated with dignity. This would be great if it were true – but it‘s not. When companies make false claims about their products, it deceives consumers and prevents them from having the information they need to make the best choices. 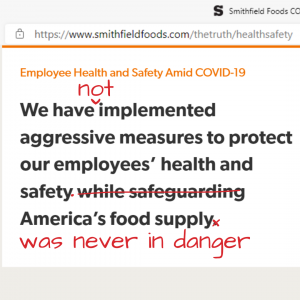 That’s why we are suing Smithfield for lying to consumers about worker protections. Meatpacking workers were hit hard by the pandemic as a result of unsafe working conditions: they were forced to work shoulder-to-shoulder on crowded processing lines, unable to access appropriate sick leave, and lacked adequate personal protective equipment. Nearly 60,000 meatpacking workers contracted the deadly virus – a total much higher than original estimated.

While workers were gravely endangered, Smithfield claimed it was aggressively protecting them. This was not the case. Our lawsuit representing Food & Water Watch alleges that Smithfield Foods repeatedly lied to consumers throughout the COVID-19 pandemic so it could protect its bottom line—at the expense of its workers’ lives. The company also falsely claimed that meat shortages were imminent, while increasing exports and maintaining freezers full of meat.

Hormel Foods, another meat corporation, similarly takes advantage of consumers’ desires to consume ethically. Hormel markets its “Natural Choice®” products as “100% Natural” and “All-Natural.” Taking advantage of consumers’ beliefs that “natural” meat means raised sustainably. However, we discovered that Hormel’s “natural” products are anything but, coming from animals raised in the worst factory farms and including additives, hormones, and antibiotics. On behalf of Animal Legal Defense Fund, we are suing Hormel for misleading consumers.

We need a government of, by, and for the people – one that prioritizes people’s health over corporate profit. However, the US government uses taxpayer dollars to prop up factory farming – a system that hurts communities, workers, and consumers. In order to hold the government accountable to serving people and not multinational corporations, the public needs to know just how much taxpayer money subsidizes abusive business.

Alongside a group of farm advocacy organizations, we have been requesting information from the Farm Service Agency regarding federal subsidies to farms under the Freedom of Information Act (FOIA). FOIA requires federal agencies to make requested documents and data available to the public. However, the documents FSA produced were either delayed or heavily redacted, hiding just how much government funding went to propping up factory farms. That’s why, alongside a group of animal, environmental, and food advocacy organizations, we are suing the FSA for its pattern and practice of withholding vital information from the public. 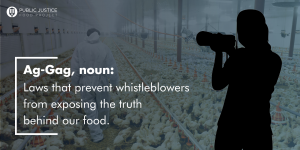 Widely shared information about how our food is raised helps us hold corporations and government accountable. However, since the 1990s, Big Ag has campaigned to pass “Ag-Gag” laws in states across the country – laws that penalize whistleblowers for exposing the worker, environmental, and animal abuse that happens behind the closed doors of factory farms and slaughterhouses. There’s a reason that the agriculture industry expends immense time and resources to pass Ag-Gag laws: to escape accountability. If the public and consumers knew the truth behind meat in the grocery store aisles, they would not stand for it.

Public Justice engages in litigation to strike down these unconstitutional and pernicious Ag-Gag laws that stand in the way of a just food system. With ten lawsuits spanning seven states, Public Justice is protecting the rights of whistleblowers and union organizers to expose human rights and animal abuses for the benefit of consumers, workers, and rural communities alike.

We believe in sustainable farms and a just food